Christopher Maximos, a political science major and rising senior at Stanford University, once viewed federal agencies as the “institutions that get everything done.” 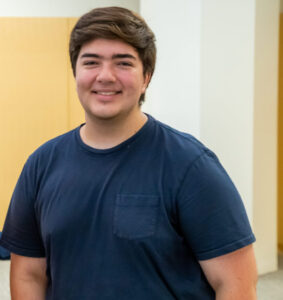 Christopher Maximos participates in the final workshop of his PIT Summer Fellowship.

Then last summer, Maximos was introduced to the inner workings of local government when he became a fellow in the Princeton Center for Information Technology Policy Public Interest Technology Summer Fellowship (PIT-SF) program.

Assigned to the San Jose, California Mayor’s Office of Technology and Innovation as a product manager, Maximos had the job of analyzing data to figure out how to get more qualified residents enrolled in the city’s under-used childcare program. He saw up close how his work directly helped eligible residents get the information they needed to enroll — and get the support they needed.

“That is a tangible rewarding experience,” he said. “Working in local government really taught me I could have a direct impact. I actually got to talk to the mayor about my ideas.”

Maximos shared his experiences this month when he and two dozen other PIT-SF college students gathered on Princeton’s bucolic campus, August 4 and 5, to share their experiences as fellows working in government. As part of the fellowship, each student spent roughly eight weeks during the summer working for agencies like the Consumer Financial Protection Bureau, the Federal Trade Commission, or the Iowa Attorney General’s Office. Because the three-year-old program began during the pandemic, their meetup at Princeton marked the first time they met face-to-face as a group; fellows from the 2020, 2021 and 2022 cohorts participated.

The fellowship targets rising juniors and seniors interested in working on policy at the federal, state or local level of government, and who attend a school in the Public Interest Technology University Network, or PIT-UN, which includes competitive schools like Ohio State, Harvard, Georgetown, Stanford, Georgia Tech, Columbia, Boston and Princeton universities.

It was designed to give students with a desire to do tech policy work a chance to embed with government agencies to get first-hand experience working on issues like child protections on the web, crimes against the elderly, or cryptocurrency schemes. Each year, the program kicks off with a boot camp organized by CITP Tech Policy Clinic lead Mihir Kshirsagar and CITP Executive Director Tithi Chattopadhyay, followed by a series of workshops with tech policy experts.

An Idea Comes to Fruition

“This certainly has met every expectation I have,” said Kshirsagar, who came up with the idea for the fellowship three years ago. “Giving college students real-life, on-the-ground experience in policy is precisely what we were aiming for,” he said. The fellowship was modeled after programs for public interest lawyers that Kshirsagar, a former attorney in the New York Attorney General’s Office, knew existed. But in the fast-growing sphere of public interest technology, where regulators and policy makers are hungry for expertise with issues around privacy and security in online data, social media and digital advertising, he said, “nothing like this existed.” 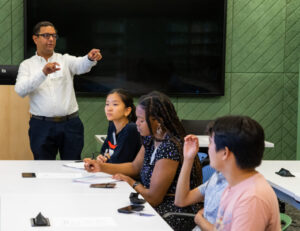 “I knew from my background in the AG’s office there was a need for people with some technical background, and that they could be useful,” Kshirsagar said.

With the backing of then CITP Director Ed Felten and Chattopadhyay, who co-captains the fellowship, Kshirsagar wrote up a proposal to Washington, D.C.-based think tank, New America and was awarded a grant as part of the Public Interest Technology University Network initiative. The money covered  the students’ $6,000-stipends, and their travel expenses.

But it wasn’t without a few hiccups. “Everything seemed great and then the pandemic forced everyone into lockdown,” he said. “It was like, ‘What are we going to do?’ ” Kshirsagar reached out to all of the government agencies that were prepared to take fellows on site, and each agreed to go remote. In subsequent years, students had the opportunity to do hybrid internships.

Emma Bearss, a Princeton School of Public and International Affairs student who was assigned to work at the Federal Trade Commission’s Division of Privacy and Identity Protection, said she was impressed with her peers and their commitment to public service.

“After two years of having everything on Zoom, having an in-person sort of experience has been so rewarding,” Bearss said. 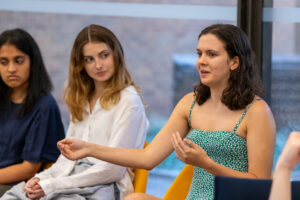 Emma Bearss, a Princeton School of Public and International Affairs student, discusses her experience working at the FTC as part of CITP’s summer fellowship program.

“Everyone is so incredibly intelligent and passionate about these issues,” she said. “Having a space entirely of people with those goals, just that drive to want to do good, has also been amazing.”

The fellows also got final insights from leading experts at the forefront of technology policy and regulation, such as Anne-Marie Slaughter, a member of CITP’s Advisory Council and the chief executive officer of the Washington, D.C.-based think tank, New America; Samuel Levine, director of the Federal Trade Commission’s Bureau of Consumer Protection; CITP faculty member Jonathan Mayer, an assistant professor of computer science and public affairs at Princeton; Travis LeBlanc, a partner in the law firm, Cooley, LLP, and a member of the CITP Advisory Council; Cory Doctorow, a special advisor to the Electronic Frontier Foundation, and Erie Mayer, chief technologist at the Consumer Financial Protection Bureau. 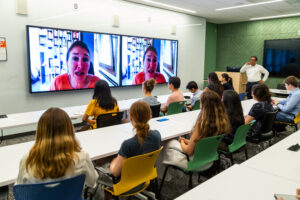 Slaughter talked to the students about the challenges of breaking into government work, and said she was heartened to see them all. “Six years ago this was just a dream,” she said of the fellowship program. Mayer encouraged the students to gain a variety of digital technology skills, including survey work, interviewing skills and using web crawlers. Meanwhile, Samuel Levine, the Federal Trade Commission director of the Bureau of Consumer Protection, told the students their expertise is needed in government.

“Having tech talent inside our agency makes a huge difference in our ability to respond to threats facing consumers,” said Levine said, whose agency hosted students. “It’s a great way to channel your talent in a way that helps people.”

Travis LeBlanc, a partner in the law firm Cooley LLP and a member of CITP’s Advisory Council, said their talent is needed because technology is expanding and evolving faster than regulators can keep up with.

“My concern is technology … changes so quickly that I’m not sure our government can keep up with it,” LeBlanc told the students. “What happens is we as a society embrace the technology and we use it more, but it’s really not regulated.”

Andreen Soley, director of New America’s Public Interest Technology Program, brought stakeholders together to launch the program. She said PIT-SF is designed to help give the students clarity about what they can do as they chart their career paths. Soley also met with the Fellows and told them that it is important to use technology to improve society — and to understand how a technological innovation may actually do harm to the community.

Sharing Stories from the Field

During their visit to Princeton, the students also engaged with one another — sharing their experiences, including funny moments on the job, and the new terminology they learned, like what “a legal pleading” or an “affidavit” is, and who can be a defendant. As a fellow, Bearrs, whose concentration is the School of Public and International Affairs, said that in her job, she conducted research, took notes at meetings, and compiled data sets to ensure orders and complaints had standardized language — all new experiences.

“I did my research on data protection, but I had never had a full experience in space so this was kind of my first opportunity to work directly with these issues,” she said. “It was incredible to learn about privacy-related enforcement and practice and then help actually create change in the space — to have an influence in really important ways as an undergrad.” 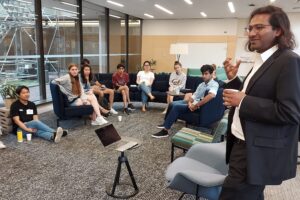 CITP Interim Director Prateek Mittal also met with the fellows, sharing with them his background as a privacy and security expert, and commended them for completing their fellowships.

Mittal told them not to be discouraged by setbacks, or lose confidence. Rather, he said: “Reflect on your success in this program,” he said, urging them to be resilient and courageous. “This is one example of success.”

To learn more about CITP’s Public Interest Technology Summer Fellowship, and how to apply, visit the PIT-SF information page here.