The Future of News 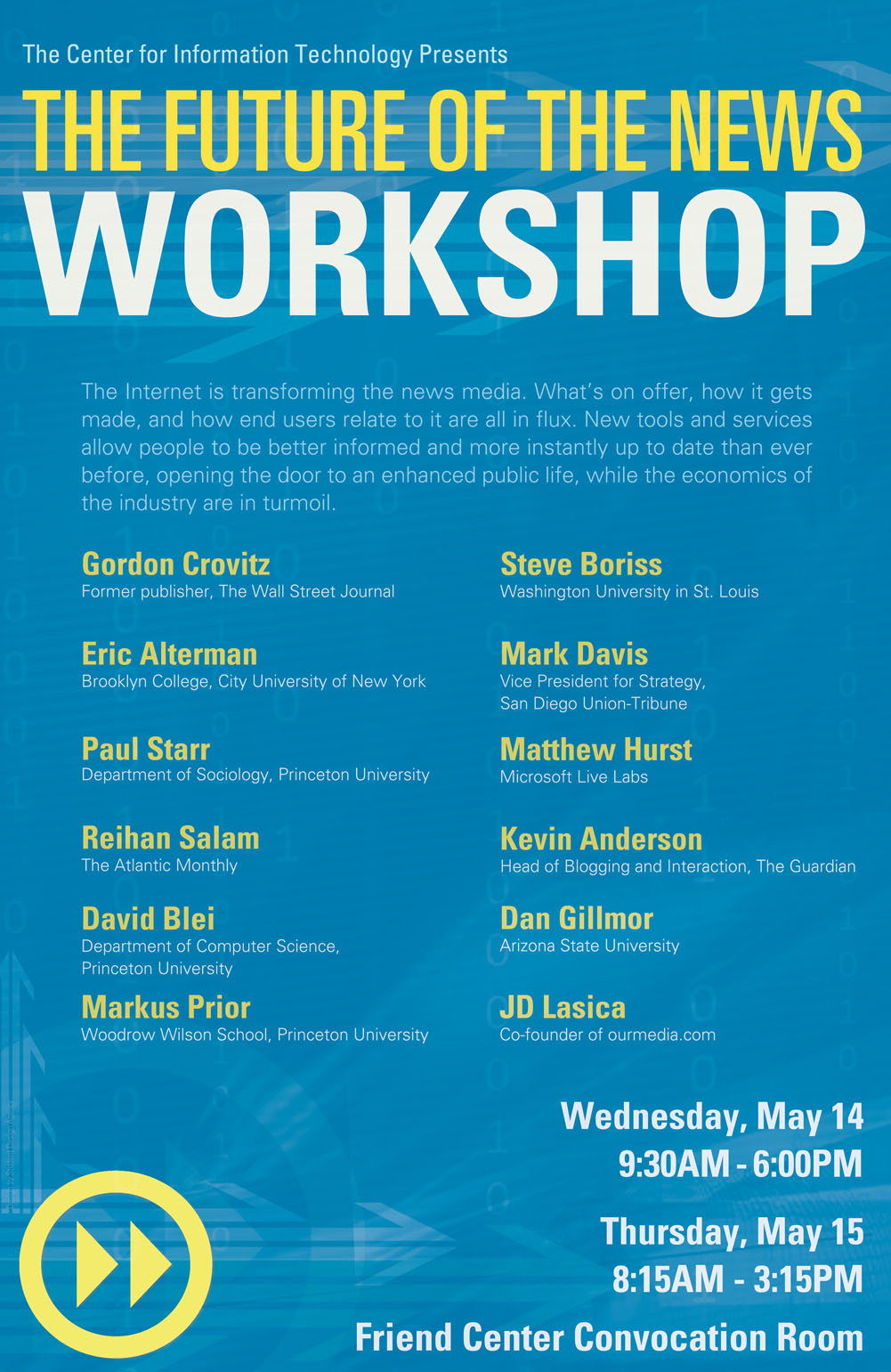 Open to the public

The Internet—whose greatest promise is its ability to distribute and manipulate information—is transforming the news media. What’s on offer, how it gets made, and how end users relate to it are all in flux. New tools and services allow people to be better informed and more instantly up to date than ever before, opening the door to an enhanced public life. But the same factors that make these developments possible are also undermining the institutional rationale and economic viability of traditional news outlets, leaving profound uncertainty about how the possibilities will play out.

How effectively can users collectively create and filter the stream of news information? How much of journalism can or will be “devolved” from professionals to networks of amateurs? What new challenges do these collective modes of news production create? Could informal flows of information in online social networks challenge the idea of “news” as we know it?

How will technology-driven changes in advertising markets reshape the news media landscape? Can traditional, high-cost methods of newsgathering support themselves through other means? To what extent will action-guiding business intelligence and other “private journalism”, designed to create information asymmetries among news consumers, supplant or merge with globally accessible news?

Featured talk by David Robinson (9:30 AM – 10:30 AM)
Attention, Distraction, and Information Glut

To what extent will new tools for visualizing and artfully presenting large data sets reduce the need for human intermediaries between facts and news consumers? How can news be presented via simulation and interactive tools? What new kinds of questions can professional journalists ask and answer using digital technologies?

What are the effects of changing news consumption on political behavior? What does a public life populated by social media “producers” look like? How will people cope with the new information glut?

Eric Alterman is a Distinguished Professor of English, Brooklyn College, City University of New York, and Professor of Journalism at the CUNY Graduate School of Journalism. He is also “The Liberal Media” columnist for The Nation and a fellow of the Nation Institute, a senior fellow and “Altercation” weblogger for Media Matters for America, (formerly at MSNBC.com) in Washington, DC, a senior fellow at the Center for American Progress in Washington, DC, where he writes and edits the “Think Again” column, a senior fellow (since 1985) at the World Policy Institute at The New School in New York, and a history consultant to HBO Films. Alterman is the author of seven books, including the national bestsellers, What Liberal Media? The Truth About Bias and the News (2003, 2004), and The Book on Bush: How George W. (Mis)leads America (with Mark Green, 2004). The others include: When Presidents Lie: A History of Official Deception and its Consequences, (2004, 2005). His Sound & Fury: The Making of the Punditocracy (1992, 2000), won the 1992 George Orwell Award and his It Ain’t No Sin to be Glad You’re Alive: The Promise of Bruce Springsteen (1999, 2001), won the 1999 Stephen Crane Literary Award, and Who Speaks for America? Why Democracy Matters in Foreign Policy, (1998). His newest book is Why We’re Liberals: A Political Handbook to Post-Bush America, (2008).

Kevin Anderson is the Guardian’s blogs editor. He writes about technology, US politics and media. Before joining the Guardian, he was the Washington correspondent for the BBC News website covering politics, technology and current affairs in North America

David Blei is an Assistant Professor in the Computer Science department of Princeton University. His Ph.D. advisor was Michael Jordan at U.C. Berkeley Computer Science. He was a postdoctoral researcher with John Lafferty at CMU in the Machine Learning department. David’s research interests include: Probabilistic graphical models and approximate posterior inference, topic models, information retrieval, and text processing and nonparametric Bayesian statistics.

Steve Boriss is the Associate Director of the Center for the Application of Information Technology at Washington University in St. Louis and blogs for The Future of News.com. His career background includes business management, marketing, advertising, public relations, consulting, and teaching at University College (“The Future of News”). He has also worked for Procter & Gamble, Johnson & Johnson, Fleishman-Hillard, and on his own. Steve’s educational background includes B.A. University of Rochester and M.B.A. University of Michigan.

Mark Davis is the Vice President for Strategy for The San Diego Union-Tribune.

More about The San Diego Union-Tribune

Dan Gillmor is the director of the new Knight Center for Digital Media Entrepreneurship at Arizona State University’s Walter Cronkite School of Journalism and Mass Communication. The Knight Center is working to help create a culture of innovation and risk-taking in journalism education, and in the wider media world. He is also the school’s Kauffman Professor of digital media entrepreneurship.
Dan remains the director of the Center for Citizen Media, a joint project with ASU and Harvard University’s Berkman Center for Internet & Society. (The center was formerly affiliated with the University of California, Berkeley.) He also write articles and has published a book called We the Media: Grassroots Journalism by the People, for the People (2004; O’Reilly Media) — the paperback version of We the Media was released in January 2006 — and is working on a new book about media in the digital age.

J.D. Lasica is one of the world’s leading authorities on social media and the revolution in user-created media. A writer, strategist, blogger and consultant, he is the co-founder and editorial director of Ourmedia.org, president of the Social Media Group and a partner in Outhink Media, a company that enables social media and distributed video production. He is currently helping to architect Bid4Vid, a new marketplace for getting videos produced. His book Darknet: Hollywood’s War Against the Digital Generation (Wiley & Sons, May 2005) explores the personal media revolution and the emerging media landscape.

Reihan Salam is an associate editor at The Atlantic and Fellow at the New America Foundation. He was previously a producer for NBC News, a junior editor and editorial researcher at The New York Times, a research associate at the Council on Foreign Relations, and a reporter-researcher at The New Republic. He is the co-author of Grand New Party: How Conservatives Can Win the Working Class and Save the American Dream (Doubleday, 2008). He writes regularly on politics, culture, and technology for The Weekly Standard, Slate, and other publications, and he is the editor of “The American Scene,” a wide-ranging blog.

More about Reihan Salam and The Atlantic