Food and discussion begins at 12:30 pm. Everyone invited.

It has been 15 years since the last wave of democratization. In the “third wave” between 1989 and 1995, many remnants of the Soviet Union and failed authoritarian regimes in other parts of the world turned themselves into variously functional electoral democracies.Around the world, roughly three in every five states held a democratic form by 2010. But as a region, North Africa and the Middle East were noticeably devoid of popular democracy movements—until the early months of 2011. Between January and April 2011 public demand for political and economic reform cascaded from Tunis to Cairo, Sanaa, Amman and Manama. Democratization movements had existed long before technologies like mobile phones and the Internet came to these countries. But with these technologies, people sharing an interest in democracy built extensive networks and activated collective action movements for political change. What might have made regimes more susceptible than others to popular uprisings, and what might explain the relative successes of some movements more than others? What role does information technology have in the modern recipe for democratization?Weighing multiple political, economic, and cultural conditions, we find that information infrastructure—especially mobile phone use—consistently appears as one of the key ingredients in parsimonious models for the conjoined combinations of causes behind regime fragility and social movement success. Internet use is relevant in some solution sets, but bycausal logic it is actually the absence of internet use that explains low levels of success. 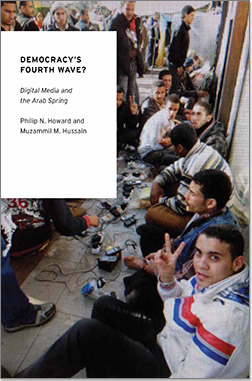 Philip N. Howard is an associate professor in the Department of Communication at the University of Washington. He directs the World Information Access Project (wiaproject.org) and the Project on Information Technology and Political Islam (pitpi.org). His book The Digital Origins of Dictatorship and Democracy has just been published by Oxford University Press. He teaches courses on research methods, politics online, and international development. Howard has been a Fellow at the Pew Internet & American Life Project in Washington D.C., the Stanhope Centre for Communications Policy Research in London, and the Center for Advanced Study in the Behavioral Sciences in Palo Alto. Philip holds a BA from Toronto, a MSc from the London School of Economics, and a PhD from Northwestern.