Phil Weiser – What Should the FCC Do About Net Neutrality? 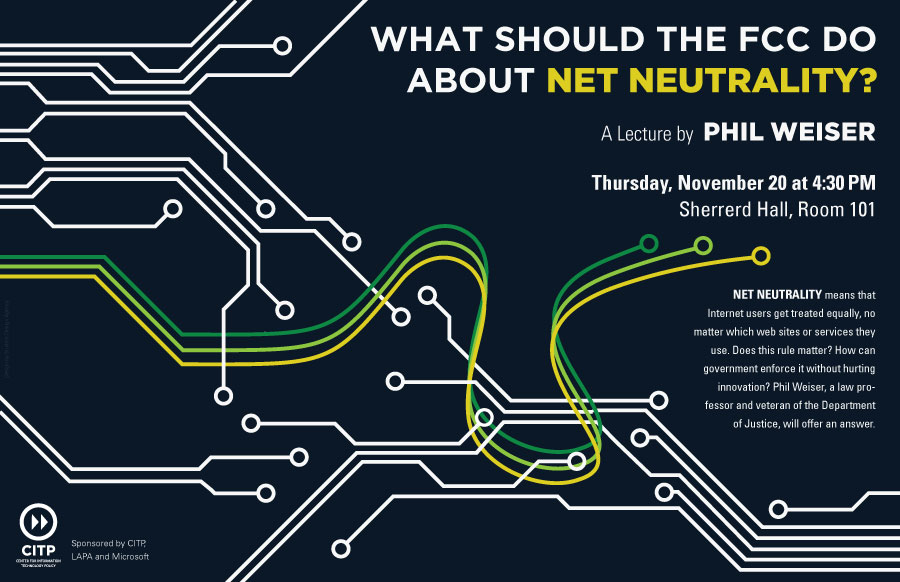 “Net Neutrality” means that Internet users get treated equally, no matter which web sites or services they use. Does this rule matter? How can government enforce it without hurting innovation? Phil Weiser, a law professor and veteran of the Department of Justice, will offer an answer.

The Federal Communications Commission’s management of the Comcast affair and its ultimate decision in that case sanctioning Comcast’s behavior underscore several critical points about the future direction of Internet policy in the U.S. First, the broadband providers are unlikely to, without any form of effective oversight, refrain from either strategic behavior or innocent intended, but unfortunate resulting conduct. Second, the era of the “unregulation of the Internet” is over. And, third, the FCC has failed to develop a thoughtful institutional strategy for making the necessary judgments and implementing an effective oversight regime to govern the behavior of broadband providers.

To address the above points, the FCC should develop a new institutional strategy for confronting network neutrality issues like the one raised in the Comcast case and others likely to arise in the future. In particular, the FCC should authorize a private body to play a self-regulatory role and thereby enlist the traditional Internet ethos of collaboration as a policymaking tool. Such a self-regulatory effort, however, cannot succeed without effective oversight and involvement from the FCC, meaning, among other things, that its own adjudicative processes should be designed and managed in a far more effective manner than employed in the Comcast case.

Notably, the FCC should develop processes more like a true adjudicative model, where it can find facts through evidence submitted under oath and subject to cross-examination, and use the deterrent value of such processes to encourage honest and good faith collaboration among the relevant stakeholders as well as compliance with the relevant standards of conduct.

While there is a role for some front-end guidance and definition of the relevant policy goals, the FCC cannot simply announce a set of rules or principles and declare victory. Indeed, as the Comcast case underscores, broadband providers will, for any number of reasons, test the bounds of principles like “reasonable network management” and the FCC will thus need to develop an institutional response for addressing such issues. To be sure, putting such a model into practice presents a number of challenges, but there are valuable guideposts on the road and enlightened broadband providers, applications developers, and end users alike recognize that it is in their collective interest to avoid overly intrusive or unduly politicized regulatory processes that have historically not governed the Internet. Over time, moreover, the model suggested herein may be suitable for a number of telecommunications policy issues that have yet to generate a robust institutional response from the FCC, including managing property rights in spectrum, overseeing interoperability between IP-IP communications, and ensuring interconnection between Internet backbone providers

Prior to joining the CU faculty, Professor Weiser served as senior counsel to the Assistant Attorney General in charge of the Antitrust Division at the United States Department of Justice, advising him primarily on telecommunications matters. Before his appointment at the Justice Department, Weiser served as a law clerk to Justices Byron R. White and Ruth Bader Ginsburg at the United States Supreme Court and to Judge David Ebel at the Tenth Circuit Court of Appeals. Weiser graduated with high honors from both the New York University School of Law and Swarthmore College.

Professor Weiser is also a past LAPA Fellow.

Sponsored by CITP, LAPA and Microsoft.