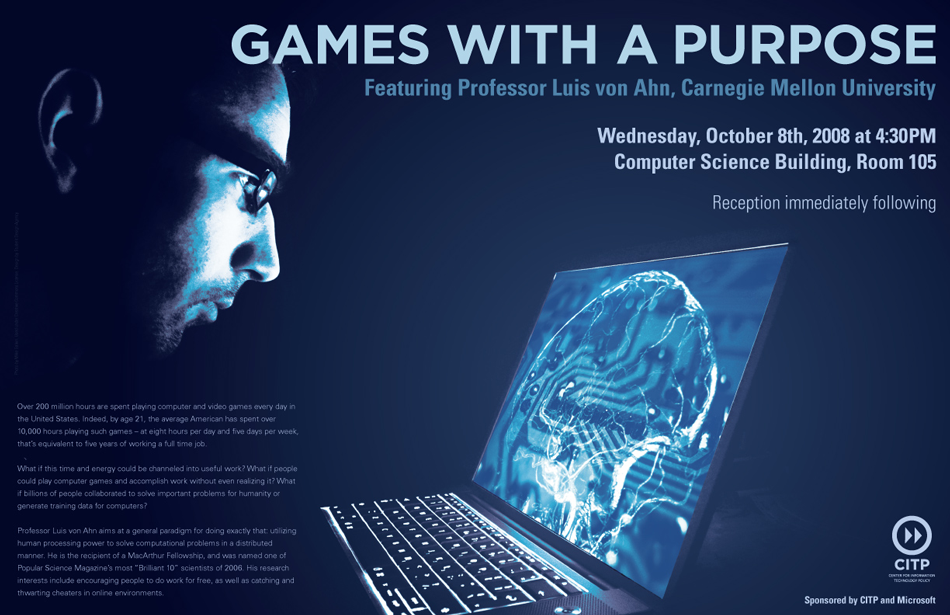 Over 200 million hours are spent playing computer and video games every day in the United States. Indeed, by age 21, the average American has spent over 10,000 hours playing such games – at eight hours per day and five days per week, that’s equivalent to five years of working a full time job.

What if this time and energy could be channeled into useful work?

What if people could play computer games and accomplish work without even realizing it? What if billions of people collaborated to solve important problems for humanity or generate training data for computers? My work aims at a general paradigm for doing exactly that: utilizing human processing power to solve computational problems in a distributed manner.

In particular, I focus on harnessing human time and energy for addressing problems that computers cannot yet solve. Although computers have advanced dramatically in many respects over the last 50 years, they still do not possess the basic conceptual intelligence or perceptual capabilities that most humans take for granted. By leveraging human skills and abilities in a novel way, I want to solve large-scale computational problems and/or collect training data to teach computers many of these human talents.

To this end, I treat human brains as processors in a distributed system, each performing a small part of a massive computation.

Unlike computer processors, however, humans require an incentive in order to become part of a collective computation. Among other things, I use online games as a means to encourage participation in the process.

In this talk, I will describe my work in the area of Human Computation.

Professor Luis von Ahn works in the Computer Science Department at Carnegie Mellon University. He is the recipient of a MacArthur Fellowship, and was named one of Popular Science Magazine’s most “Brilliant 10” scientists of 2006. He has also been named one of the 50 most influential people in technology by silicon.com. His research interests include encouraging people to do work for free, as well as catching and thwarting cheaters in online environments.