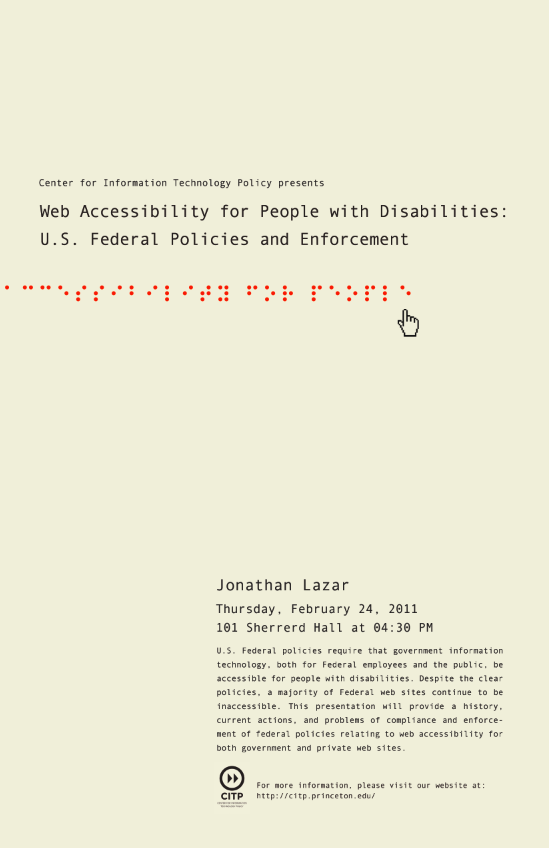 U.S. Federal policies require that government information technology, both for Federal employees and the public, be accessible for people with disabilities. Despite the clear policies in place, a majority of Federal web sites continue to be inaccessible. Federal policies related to web accessibility for private companies covered by the Americans with Disabilities Act are less clear, although new, stronger policies are currently under development by the Justice Department.

During 2010, there have been a number of actions taken by various federal agencies relating to web accessibility, including the draft of the new Section 508 regulations from the Access Board (March 2010), the memo from the Office of Management and Budget on Section 508 enforcement (July 2010), and the Advanced Notice of Proposed Rulemaking from the Justice Department, on the accessibility of web information provided by entities covered by the Americans with Disabilities Act (July 2010). This presentation will provide a history of federal policies and enforcement relating to web accessibility for both government and private web sites, detail the relationship between U.S. federal policies and international standards, describe the 2010 activity in web accessibility policy, discuss the problem of compliance and enforcement, and present the results from three data collection efforts related to web accessibility policy.

Jonathan was a panelist on a Washington DC radio show on 10/12/10 discussing web accessibility, both technical and policy. One of the callers into the show was the Assistant Secretary from the Department of Labor.

You can read a transcript of the lecture.

Dr. Jonathan Lazar is a Professor of Computer and Information Sciences at Towson University. He is the founder and director of the Universal Usability Laboratory at Towson University, and currently serves as director of the undergraduate program in Information Systems. Dr. Lazar is co-author of the book Research Methods in Human-Computer Interaction (Wiley, 2010), editor of the book Universal Usability (Wiley, 2007) and author of Web Usability: A User-Centered Design Approach (Addison-Wesley, 2006). Dr. Lazar is the ACM SIGCHI (Special Interest Group on Computer-Human Interaction) Chair of Public Policy, he serves on the editorial boards of Universal Access in the Information Society and Interacting with Computers, and serves as forum editor for “Interacting with Public Policy” in ACM Interactions Magazine. Dr. Lazar received the 2010 Dr. Jacob Bolotin Award from the National Federation of the Blind, and received a 2009 Innovator of the Year Award from the Maryland Daily Record.

CITP studies digital technologies in public life. It is a joint venture of the School of Engineering and Applied Sciences and the Woodrow Wilson School.