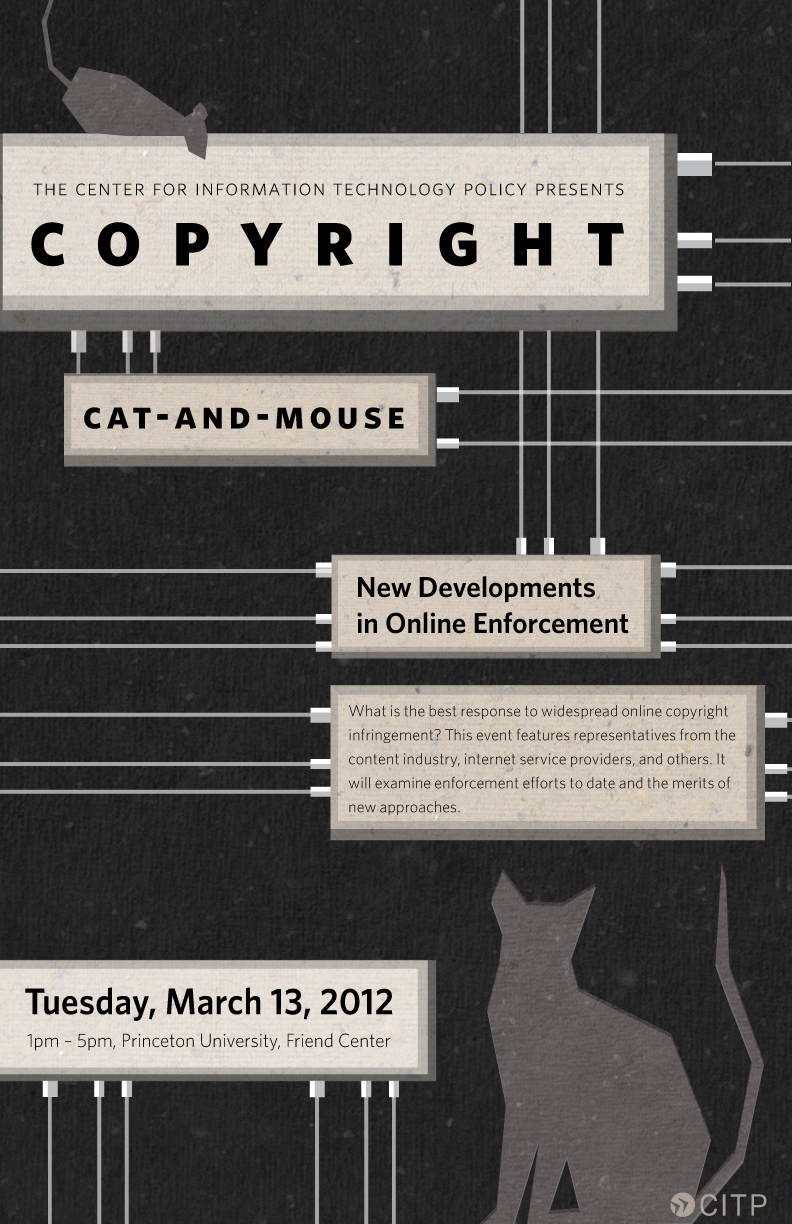 This conference is free and open to the public. Please register here.

Copyright enforcement in the digital era has been an ongoing game of cat-and-mouse. As new technologies emerge for storing and transmitting creative works, content creators struggle to identify the best response. The content industry has employed different tactics over time — including technological copy protection, litigation against infringers, and collaboration with Internet Service Providers (ISPs). In August of 2011, some members of the content industry signed an historic Memorandum of Understanding (MOU) with some of the largest ISPs, agreeing to a “graduated response” system of policing. ISPs agreed to notify their subscribers if allegedly infringing activity was detected from their connection and, if infringement continued after multiple warnings, to impede access. Meanwhile, a wave of “copyright troll” litigation has continued to sweep the country and burden the courts. Use of takedown notices under the Digital Millenium Copyright Act has continued to evolve. This event will examine enforcement efforts to date, and debate the merits of the new private approach embodied in the MOU framework. It will feature discussions between members of the content industry, internet service providers, web companies, and academics. Background written materials are available.

CLE Credit for Attorneys
This program had been approved by the Board on Continuing Legal Education of the Supreme Court of New Jersey for 3.6 hours of total CLE credit. This program has been approved by the Pennsylvania Continuing Legal Education Board for 3.0 hours of substantive law, practice and procedure CLE credit. Under the New York CLE Board’s approved jurisdiction policy, this program qualifies for 3.5 credits for NY licensed attorneys. Those seeking CLE credit should review the written materials.

The following materials provide background for the panel discussions, and should be reviewed by all attorneys seeking CLE credit for attendance.

Randy has served as Privacy Counsel for Cox Communications since 2003. He is responsible for legal and privacy policy issues relating to the cable, internet and telecommunications services of Cox throughout the United States.

Before joining Cox, Randy served in a wide range of legal roles with BellSouth, including responsibility for its print and internet publishing entities, regulatory, venture capital and real estate development operations. Prior to then, he practiced law representing corporate and construction clients.

Mr. Epstein is currently AT&T’s chief public policy and corporate compliance
counsel, where his duties include development and implementation of legal,
regulatory and public policy strategies pertaining to wireline and wireless
telecommunications and broadband networks.

Michael J. Freedman is an Assistant Professor in the Computer Science Department at Princeton University, with a research focus on distributed systems, networking, and security. Prior to that, he received his Ph.D. in computer science from NYU’s Courant Institute and his S.B. and M.Eng. degrees from MIT. He developed and operates several self-managing systems — including CoralCDN, a decentralized content distribution network, and DONAR, a server resolution system powering the FCC’s Consumer Broadband Test — which serve millions of users daily. Other research has included software-defined and service-centric networking, untrusted cloud services, fault-tolerant computer systems and storage, virtual world systems, peer-to-peer systems, and various privacy-enhancing and anti-censorship systems. Freedman’s work on IP geolocation and intelligence led him to co-found Illuminics Systems, which was acquired by Quova, Inc. in 2006. His work on programmable enterprise networking (Ethane) helped form the basis for the OpenFlow / software-defined networking architecture. Honors include a Sloan Fellowship, NSF CAREER Award, ONR Young Investigator Award, and DARPA Computer Science Study Group membership.

Bart Huffman, an intellectual property law partner in the Austin office of Locke Lord LLP, has experience with a wide range of data management, privacy, and data security issues. With a systems engineering background, and a proven track record in intellectual property, e-commerce, and federal litigation matters, he offers a unique, broad perspective for the critical data and intellectual property issues faced by cutting-edge companies today. His clients, which include Fortune 500 companies as well as regional players, rely on his advice in connection with strategy and policy issues and initiatives, commercial technology services and other transactional matters, compliance advice, and privacy and intellectual property litigation. Bart is admitted to practice law in Texas, California and New York, and before various federal courts. He is also a USPTO Registered Patent Attorney and an IAPP Certified Information Privacy Professional.

Joe Karaganis joined The American Assembly at Columbia University as Vice President in 2010. His work focuses on the relationship between digital convergence and cultural production, and has recently included research on broadband adoption, data policy, and media piracy. He is the editor of The Politics of Open Source Adoption (2005), Structures of Participation in Digital Culture (2007), and Media Piracy in Emerging Economies (2011), among other work. Prior to joining the American Assembly, he was a program director at the Social Science Research Council in New York.

Timothy B. Lee covers tech policy for Ars Technica, with a particular focus on patent and copyright law, privacy, free speech, and open government. While earning his CS master’s degree at Princeton, Lee was the co-author of RECAP, a Firefox plugin that helps users liberate public documents from the federal judiciary’s paywall. Before grad school, he spent time at the Cato Institute, where he is an adjunct scholar. He has written for both online and traditional publications, including Slate, Reason, Wired.com, and the New York Times. He lives in Philadelphia.

As Associate General Counsel for litigation, Daniel Mandil is responsible for managing Viacom’s large and strategic litigation matters and coordinating other litigation around the company and at its subsidiaries including MTV Networks, Paramount Pictures and Black Entertainment Television. Immediately prior to joining Viacom, Mr. Mandil was the Senior Executive Vice President, General Counsel and Chief Content Protection Officer for the Motion Picture Association of America (MPAA). In that role, he oversaw all legal affairs for the MPAA and all its projects and programs on behalf of its members relating to copyright theft and intellectual property protection on a global basis. Before joining the MPAA, Mr. Mandil served as Executive Vice President, Global General Counsel & Secretary of Sony BMG Music Entertainment, the corporate predecessor of Sony Music, the world’s second largest recorded music company. For many years before that, he was a litigation partner in the New York offices of Covington & Burling and its predecessor firms where he litigated a wide array of commercial, IP and securities matters. Mr. Mandil began his legal career as a judicial law clerk to then-Judge Ruth Bader Ginsburg at the United States Court of Appeals for the DC Circuit followed by a judicial clerkship with Associate Justice Sandra Day O’Connor at the United States Supreme Court. After receiving a B.A. and an M.A. from Harvard, Mr. Mandil graduated from Columbia Law School where he was the Editor-in-Chief of the Columbia Law Review.

Preston Padden had a 38 year career in the media business holding the following positions: Assistant General Counsel, Metromedia; President, The Association of Independent Television Stations; President, Network Distribution, Fox Broadcasting Company; Chairman and CEO, American Sky Broadcasting (merged into Dish Network); President, ABC Television Network; and Executive Vice-President, Government Relations, The Walt Disney Company. Mr. Padden served on the Boards of The National Association of Broadcasters and The Motion Picture Association of America. Mr. Padden is an Adjunct Professor at the University Of Colorado School Of Law and University’s Interdisciplinary Telecommunications Program (a joint venture of the Law School and the Graduate School of Engineering). Mr. Padden also serves as a Senior Fellow and Board Member at the University’s Silicon Flatirons Center for Law, Technology and Entrepreneurship.

Katherine Oyama is Policy Counsel for Google, where she focuses on copyright and trademark law and policy. From 2009 to 2011, she worked in the Office of the Vice President as Associate Counsel and Deputy Counsel to Vice President Joseph R. Biden. Prior to her government service, Katherine was a litigation associate at Wilmer Cutler Pickering Hale & Dorr’s Washington office, where she worked on intellectual property cases, government and regulatory litigation, and pro bono matters. She previously worked for a New York-based strategy consulting firm, a Silicon Valley-based Internet start-up, and a Washington-based public interest research organization. Katherine is a graduate of Smith College, where she graduated with high honors in Government, and the University of California, Berkeley School of Law (Boalt Hall), where she served as senior articles editor of the Berkeley Technology Law Journal. She recently testified before Congress on issues relating to copyright, trademark, and Internet policy.

Steve’s work at CITP includes internet privacy, computer security, government transparency, and telecommunications policy. Before coming to CITP he was a Fellow at the Berkman Center for Internet and Society at Harvard, and helped launch the public radio startup PRX.org. He holds degrees from Calvin College and MIT. He blogs at Freedom to Tinker.

Driving directions to Princeton and campus maps are available on the Princeton Visitor Site.

Please see the Visitor Parking website for information regarding parking in the appropriate visitor lots on campus. You will probably want to park in Lot 21. There is also metered parking along William, Olden, and Prospect.

When coming by train from NYC, take the NJTransit northeast corridor line from New York Penn station to Princeton. When coming by train from Philadelphia, take the SEPTA train from Philadelphia to Trenton. Then take NJTransit northeast corridor line from Trenton Station to Princeton. In either case, you must change trains at Princeton Junction and take a smaller train called the “dinky” to Princeton, or take a cab to campus. When headed home, trains leave from the Princeton station roughly every half hour. Assume about two hours to go from Princeton Station to Philadelphia, New York Penn Station, or to get to your terminal at Newark Airport. If you are going to Newark Airport on NJTransit, be sure to buy the “Newark International Airport (EWR)” ticket rather than the “Newark” ticket — you will use this ticket to ride the airport shuttle train called the “Airtrain” to your terminal.

The E-Quad is within walking distance from the Princeton train station and from most parking lots. CITP’s building, called Sherrerd Hall, and the Friend Center building are both in the E-Quad area between William Street and Prospect Avenue, near Olden Street (the best address for GPS is: 35 Olden Street, Princeton, New Jersey, 08544). If you wish to take a shuttle instead of walking, refer to the shuttle tracking map for details of which shuttle to take. Your stop is the Friend Center building on the corner of Olden and Nassau.

For more hotel options go to Campus Travel. Click on the left menu option “Hotels” and then select “Princeton Area Hotels.” (Ask for the Princeton rate. You may want to confirm with the hotel that they have shuttle service to campus.)