CITP Webinar: Technology and Elections During a Pandemic 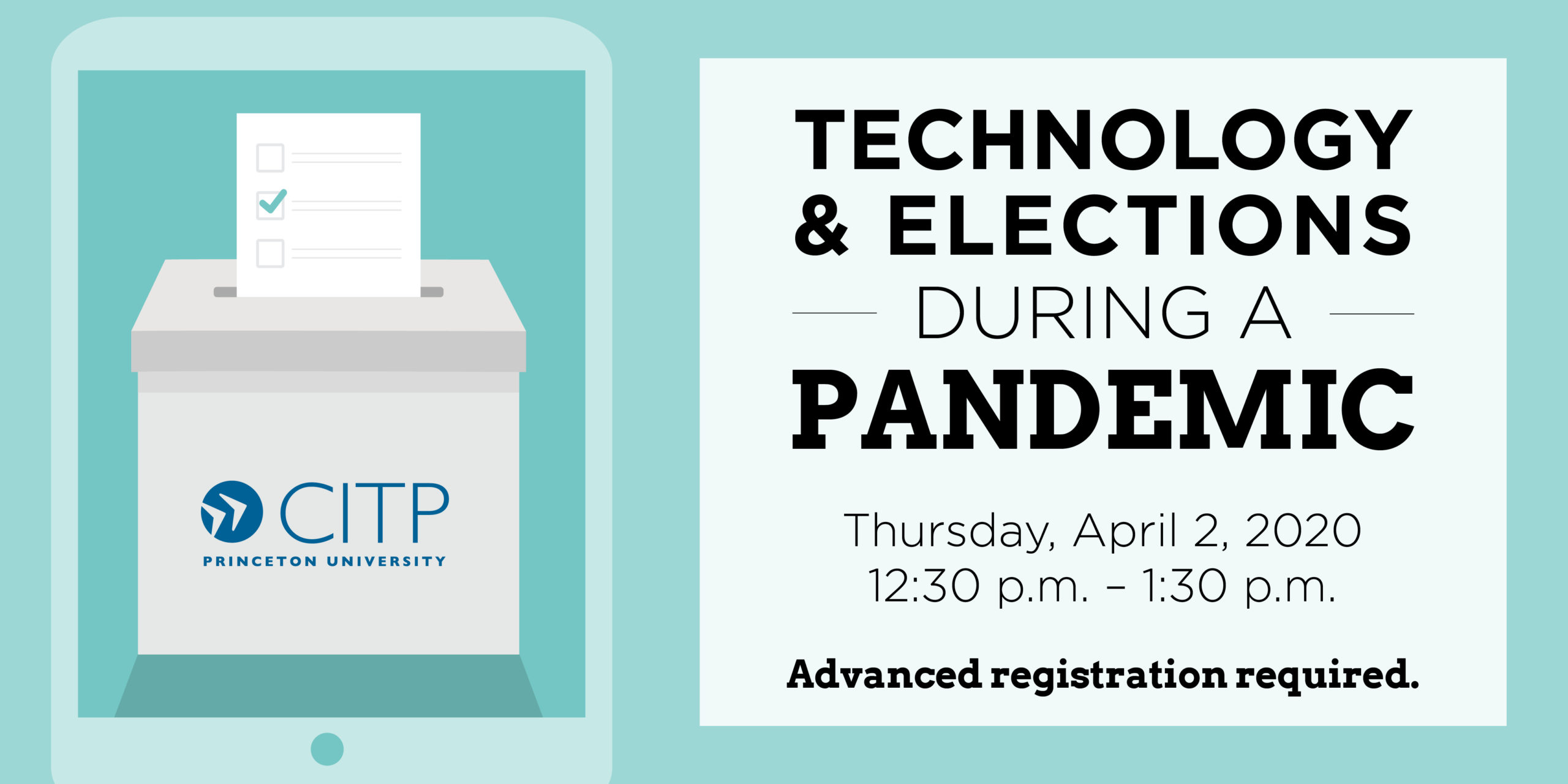 CITP presented a panel on elections and the role of technology during a pandemic on April 2. Professor Ed Felten spoke to experts about the challenges and risks facing the 2020 elections, and how we can design solutions and protective measures to secure our elections. The webinar addressed a broad range of issues including voter experience, disinformation, campaign finance and issues around scaling up vote by mail.

Edward W. Felten is the Robert E. Kahn Professor of Computer Science and Public Affairs at Princeton University and the founding director of Princeton’s Center for Information Technology Policy. In 2011-12 he served as the first chief technologist for the Federal Trade Commission. His research interests include computer security and privacy, especially relating to media and consumer products; and technology law and policy. He has published about 80 papers in the research literature and two books. His research on topics such as web security, copyright and copy protection, and electronic voting has been covered extensively in the popular press. His weblog, at freedom-to-tinker.com, is widely read for its commentary on technology, law and policy.

Professor Felten is a member of the National Academy of Engineering and the American Academy of Arts and Sciences, and is a fellow of the ACM. He has testified at House and Senate committee hearings on privacy, electronic voting and digital television. In 2004, Scientific American magazine named him to its list of 50 worldwide science and technology leaders.

Dana Chisnell is an adjunct lecturer at Harvard Kennedy School of Government, Partner in Project Redesign at NCoC.org, and former co-director at the Center for Civic Design. Dana is a pioneer and thought leader in civic design,  bringing deep experience to that space. After working with banks, insurance companies, and tech companies for decades to help them improve experiences for their customers and workers, Dana takes that knowledge to the government space.

She started with research at the National Institute of Standards and Technology (NIST) into the use of language in instructions on ballots (with Ginny Redish), and work on standards and testing for poll worker documentation for the Voluntary Voting System Guidelines (VVSG). She has applied this work in dozens of states, and even advised election commissions in other countries.

Dana is an expert in plain language and usability for older adults, including groundbreaking work at AARP that was the basis for several requirements in the Web Content Accessibility Guidelines (WCAG).

She teaches design in government at the Harvard Kennedy School of Government in the masters level Democracy, Politics and Institutions program. She also teaches with Whitney Quesenbery a course on design in elections that is part of the Election Academy at the University of Minnesota – the first university program to professionalize election administration.

From October 2014 to October 2016, Dana did a tour of duty as a “generalist problem solver” for the United States Digital Service in the Obama White House, doing user research and civic design across agencies. Her particular focus was on helping US Citizenship and Immigration Services modernize its software development and design practices to improve experiences for immigration officers and the public. She also helped the Department of Homeland Security design a more modern, agile, and design-forward procurement process.

As the editor of the Field Guides To Ensuring Voter Intent, she has taught thousands of election officials how to improve ballots, voter guides, web sites, and other election materials to ensure voter intent. She worked on the Anywhere Ballot, a ballot marking interface tested for accessibility by people with cognitive disabilities and low literacy. Dana and Jeff Rubin wrote the Handbook of Usability Testing Second Edition (Wiley 2008), the seminal book on the topic. Dana serves on advisory boards for US Vote and the Bridge Alliance.

Jared DeMarinis is currently the Director of Candidacy and Campaign Finance for the Maryland State Board of Elections. His main duties include the implementation of electoral policy and the interpretation of state candidacy and campaign finance laws and regulations. Recently, he presided over the most expensive gubernatorial election in Maryland’s history.

Mr. DeMarinis has worked on numerous political campaigns spearheading their legal networks. In 2002, Mr. DeMarinis served on Senator Robert G. Torricelli’s litigation team, which successfully argued before the New Jersey State Supreme Court for the replacement of Senator Torricelli with Senator Frank Lautenberg on the ballot. Afterwards, Mr. DeMarinis was counsel on a landmark case involving the issues of campaign contributions that exceeded the statutory limitation, improper expenditures, and voter fraud in New Jersey.

Mr. DeMarinis is a graduate of Villanova University (’95) and Rutgers University- School of Law- Newark (’01).

Ellen L. Weintraub has served as a commissioner on the U.S. Federal Election Commission since 2002 and chaired it for the third time in 2019. During her tenure, Weintraub has served as a consistent voice for meaningful campaign-finance law enforcement and robust disclosure. She believes that strong and fair regulation of money in politics is important to prevent corruption and maintain the faith of the American people in their democracy.

Weintraub sounded the alarm early–and continues to do so–regarding the potential for corporate and “dark-money” spending to become a vehicle for foreign influence in our elections.

Weintraub is a native New Yorker with degrees from Yale College and Harvard Law School. Prior to her appointment to the FEC, Weintraub was Of Counsel to the Political Law Group of Perkins Coie LLP and Counsel to the House Ethics Committee.