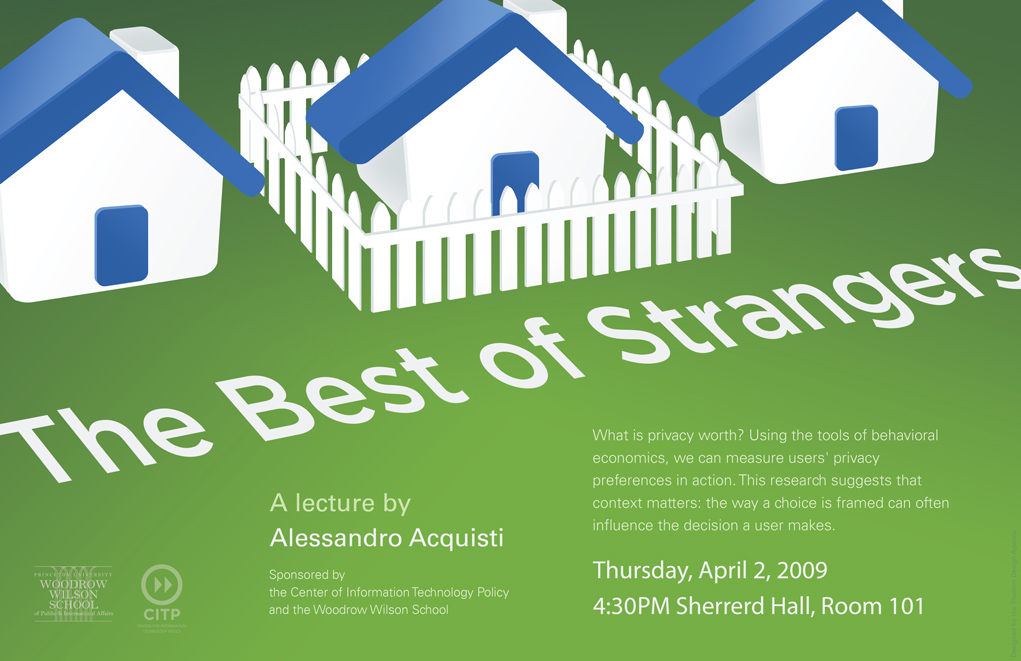 We investigate privacy valuations and decision making through the lenses of behavioral economics. Contrary to the assumption in much social science that people have stable, coherent preferences with respect to personal privacy, we find that privacy valuations (measured by willingness to trade-off personal information for monetary rewards) and concerns about privacy (measured by divulgence of private information) are highly sensitive to contextual factors. We report results from a number of experiments, one of which was designed to measure individual willingness to pay to protect and willingness to accept to divulge personal data; while others were designed to elicit or to suppress privacy concerns. This research raises questions about whether individuals are able to navigate in a self-interested fashion increasingly complex issues of privacy.

Alessandro Acquisti is an Assistant Professor of Information Technology and Public Policy at the Heinz College, Carnegie Mellon University, a member of Carnegie Mellon Cylab, and a fellow of the Ponemon Institute. His work investigates the economics and behavioral economics of privacy and information security. Prior to joining CMU Faculty, he researched with the Internet Ecologies group at the Xerox PARC labs in Palo Alto (as intern); with the Human-Centered Computing group at RIACS, NASA Ames Research Center (as visiting student); and at SIMS, UC Berkeley, where he received a Master and a Ph.D. in Information Systems in 2001 and 2003. He received a Master in Economics from Trinity College, Dublin, in 1999; and a Master in Econometrics and Mathematical Economics from the London School of Economics also in 1999. Alessandro has received national and international awards, including the 2005 PET Award for Outstanding Research in Privacy Enhancing Technologies and the 2005 IBM Best Academic Privacy Faculty Award. He is and has been member of the program committees of various international conferences and workshops, including ACM EC, PET, WEIS, ETRICS, WPES, LOCA, QoP, and the Ubicomp Privacy Workshop at Ubicomp. In 2007 he chaired the DIMACS Workshop on Information Security Economics and the WEIS Workshop on the Economics of Information Security. In 2008, he co-chaired the first Workshop on Security and Human Behavior with Ross Anderson, Bruce Schneier, and George Loewenstein. His research on the economics of privacy has been disseminated through journals (including Marketing Science, IEEE Security & Privacy, the Berkeley Law and Technology Journal, and the Journal of Comparative Economics), leading international conferences, book chapters, and, recently, a book (“Digital Privacy: Theory, Technologies, and Practices.” Auerbach, 2007). His findings have been featured in media outlets such as NPR Fresh Air, NBC, MSNBC.com, the Washington Post, the New York Times, and the New Scientist. His work has been funded by the National Science Foundation, the Humboldt Foundation, the National Aeronautics & Space Administration, Microsoft Corporation, as well as CMU CyLab and CMU Berkman Fund.