The Center for Information Technology Policy is very happy to announce that CITP Director Matthew J. Salganik has won the 2022 Book Award from the American Association for Public Opinion Research for his 2018 book, Bit by Bit: Social Research in the Digital Age. 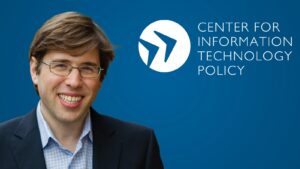 AAPOR, an association for public opinion and survey research professionals, announced the winner on its website on Wednesday, April 6, 2022. Its awards committee wrote:

“Matthew J. Salganik’s Bit by Bit: Social Research for the Digital Age offers a forward-looking roadmap for social scientists looking to harness new data sources for understanding human behavior … In positioning survey research within the emerging field of data science, it reinforces the need to use big data as a complement to rather than a replacement for high quality surveys; offers key ideas from survey research to the data science community; pushes researchers to take advantage of new technology to improve survey sampling, measurement, and respondent engagement; and details the complex ethical issues raised by the use of big data in survey research.”

The AAPOR Book Award recognizes books that have influenced the understanding of public opinion or survey research methodology. A book must have been published three years prior to the year in which the award is given.

Salganik said it is this aspect of the AAPOR criteria that makes the award feel extra special.

“I certainly didn’t imagine that this would happen when I was working on the book and it is particularly nice that it comes after some time has passed since it was published,” said Salganik, reached at his Princeton University office. “It feels like a nice recognition. I wrote the book to try to be helpful and this makes me think that was recognized.  It also feels nice that the book seems to have aged well.  I really tried to make this a timeless book on a timely topic.”

Bit by Bit was released in 2018 and grew out of a course Salganik started teaching at Princeton in 2007 called, “Web-based Social Research.” At the time, the course was one of the few in the world with such a title, but it has become part of the vastly growing field of computational social science.

Bit by Bit has since been translated into Italian, Chinese, Japanese and Korean, with a Turkish translation soon to come.

AAPOR announced the winner on its website on Wednesday, April 6, 2022.

Salganik will receive the award at the AAPOR’s 77th Annual Conference in Chicago.